Warshaw Law Firm, advocating for the educational rights of special needs children, is dedicated to protecting the rights of children with disabilities and children who are the victims of or accused of bullying, and assisting families in crisis through mediation and collaborative divorce. 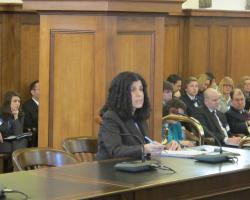 A bill advancing through the legislature would allow students to meet their world language requirement by studying American Sign Language.

Julie Warshaw is an attorney who represents children with special needs and learning disabilities. She says learning sign language can be beneficial for any student.

“With the growing need for translators in our expanding world economy, the movement towards inclusion within our classes, and the multi-sensory nature of American sign language, it has become an intriguing alternative to the typically offered languages in our schools.”

Jennifer Keyes-Maloney is a lobbyist for the New Jersey Principals and Supervisors Association. She says sign language is universal and can be an important skill for kids who can hear just fine.

“A lot of schools currently have sign language as an option particularly at the elementary grades but it also extends up into the high school and middle school arena as well.  So this is just codifying existing practice and sending a message to the entire school community that this is something you can do if you didn’t know you could.”

Sharon Seyler is the legislative advocate for the New Jersey School Boards Association.

“The high schools are telling me that most liberal arts colleges are accepting it as a foreign language requirement. I already know of districts that are already implementing this program. One of the districts that I spoke to is actually making it an honors language program for next year.”